Movie with Abe: The Last Sermon 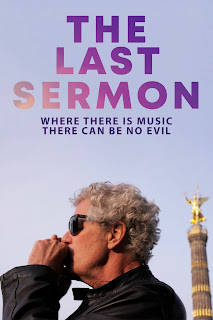 A near-death experience can change a person’s perspective in a major way. Most people don’t act as if the next moment could be their last, and knowing that a premature end was just barely averted can trigger a new way of approaching circumstance and fortune. Those shaken by what they have endured may seek to stay as safe as possible and ensure that they won’t be placed in a similar situation in the future, eager to leave it behind and bury the memory. Others may be inspired to engage with what it is that almost killed them and to better understand the motivations of those responsible.

Jack Baxter and Joshua Faudem were in Tel Aviv filming their documentary “Blues by the Beach” when they were injured in a suicide bombing at the bar Mike’s Place in 2003. That event altered the course of the film they were making then, and now the two have returned to take a broader look at terrorism, charting the way in which the corruption of religious doctrines leads to violence and how vulnerable populations, including refugees, are targeted for participation.

This film opens with the famous line from writer Miguel de Cervantes: “Where there is music there can be no evil.” Baxter and Faudem’s quest is as much to determine what unifies people as it is to learn what divides them, and one of the ways that they see an opportunity for cooperation is through music, which was a crucial part of the atmosphere at Mike’s Place that was so viciously disrupted by the terrorist attack in which they were involved. It’s impossible for Baxter in particular to be separated from the story he is researching since he has strongly-held beliefs about the things people are willing to do to each other under the guise of being devout, and he makes repeated mentions to the physical remnants of that explosion that he still wears and feels.

This film aims to be a comprehensive investigation into the true intentions of Islam and how it in no way advocates for the terrorism that has emerged from its most radical factions. It can’t possibly cover an entire religion in under two hours, but it does manage to extract some resounding viewpoints for a number of individuals, alternately hateful and encouraging. Baxter’s own anger that emerges when he encounters those unwilling to see the error in their ways is particularly magnetic, and having a filmmaker become the subject of his film is hardly a detriment in this instance. The film is a conversation-starter genuinely intent on finding meaning in tragedy and forging ahead with a resolve to change the future.