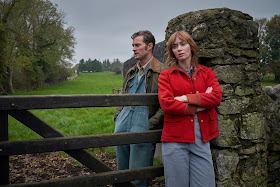 Growing up in close proximity has the potential to create bonds for life. Children may become inseparable friends or bicker when they are young before building a more positive and lasting relationship as they become older. There is also the possibility for resentment and feuding, something that may arise out of personal disagreements or a more philosophical differences in opinion. Two people may not feel exactly the same way about each other, which can result in its own complications, especially if one hopes for romance and a life together and the other is either not interested or completely clueless about that affection.

Rosemary (Emily Blunt) and Anthony (Jamie Dornan) have known each other for years as residents of neighboring farms in Ireland. Anthony is startled and offended when his aging father, Tony (Christopher Walken), tells him that he plans not to leave the family farm to him but instead to sell it to his American nephew, Adam (Jon Hamm). Unsure of his purpose and his future, Anthony is also unaware of how Rosemary seems him, and Adam’s arrival only threatens to drive a further wedge between them as it fuels his sense of inadequacy and failure.

This country drama comes from writer-director John Patrick Shanley, based on his play “Outside Mullingar.” Shanley’s first film was the Oscar-winning “Moonstruck,” and his most recent cinematic effort was “Doubt,” also based on a play he wrote. This considerably lighter offering is nowhere near as compelling, setting up a predictable narrative with characters who don’t feel fully developed or three-dimensional. Sweeping shots of Ireland are certainly worthwhile and add to a story that might otherwise resemble a stage production due to the generally intimate nature of the conversations between its small number of characters.

It’s hard to find an example of Blunt, who starred recently in “Mary Poppins Returns” and “A Quiet Place,” giving a bad performance, and this turn is merely adequate. Blunt is doing the best she can, acting opposite a lackluster Dornan. Both Hamm and Walken have also been much better in other roles. The visuals are the film’s strongest assets, namely the cinematography by Stephen Goldblatt. Anyone seeking a sappy romantic drama may find exactly what they’re looking for here, but this film does little to elevate the genre, navigating an expected and repeatedly explored trajectory with few surprises along the way.